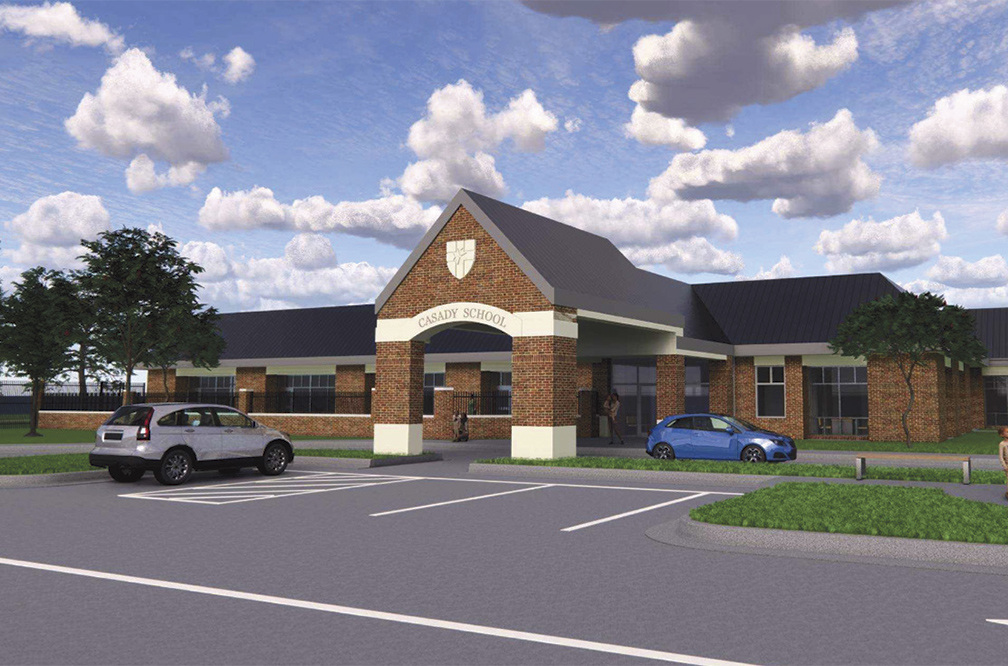 A $7.5 million expansion and renovation of the Loeffler Elementary Division building on the Casady School campus begins this summer in the Village.

Jim Bonfiglio, business manager for the Episcopal-affiliated school, shared plans for the building’s 7,500-square-foot expansion at The Village’s recent town council meeting. The building is designed to total 19,000 square feet when completed

The Loeffler Primary Division building was first opened in 1969 and has served generations of families with an open floor plan tailored to fulfill Casady’s Montes-sori-based mission. The expansion project includes four new classrooms, four outdoor classrooms, a support room for visiting therapists and tutors, a community meeting room for faculty, staff and parents, and an interior morning courtyard with windows.

The entire building is about to undergo renovations, including a new secondary parking lot and upgrades to HVAC, millwork, flooring, plumbing and restrooms. ADG is the architect of the project whose construction was carried out by Smith & Pickel.

“We’ve had increased community interest in having their children attend our primary division,” Bonfiglio said. “Our current physical plant could not accommodate an increase in enrollment while continuing to serve our mission and meet the needs of our children.

“This renovation and expansion will enhance the learning environment for our students through innovative programming that accommodates growing enrollment.”

In addition to the administrators, the primary division has 18 full-time teachers and five part-time assistants.

Bonfiglio said interest in Casady’s primary division has steadily increased over the past five years.

“This increase in inquiries and applications was an indication that an increase in registrations was needed for our community,” he said. and kindergarten classes three years ago.

“With this temporary solution in place, we outlined our fundraising initiatives, developed the expansion and renovation plans, and began design work for a permanent solution,” he added.

Bonfiglio told the council there were no plans to close any streets during construction, with school traffic being redirected onto Nichols Road from the school’s learning centre.

Casady School opened in the middle of a prairie in 1947 at the intersection of Britton Road and Pennsylvania Avenue before The Village was incorporated in January 1950. The school currently has 989 students in kindergarten through 12th grade. year with 153 pupils in the primary division. .

Council unanimously approved a resolution to sign an agreement with Cowan Engineering for engineering services to complete a $59,000 storm water ingress and infiltration study along Village Drive in the center from the city.

Much of the city’s sewer system was built in the 1950s and 60s, and as the system aged, an increasing amount of stormwater entered the sewer system, causing resulted in overflow issues. Cowan Engineering was engaged to carry out preliminary planning and assessment of the system, infiltration and inflow study, and provide recommendations and estimated costs for construction to improve the system.

The city has experienced sanitary sewer problems near Carlton Way and Village Drive when, during periods of wet weather, some manholes overflow as the system fills with stormwater. Other manholes on Village Drive near the Hawthorn neighborhood also tend to overflow.

The council hopes to begin the study before the spring rains so they can measure sewage flows in dry and wet weather to formulate an action plan.

“The report will provide guidance on what needs to be done,” City Manager Bruce Stone said. “This study will be for the city’s central drainage basin, not including West May or East Penn, although there will be some overlap between the areas.

“The board intends to allocate the remaining $835,000 from the US bailout to begin improving the system to reduce stormwater inflow and infiltration into the system,” he said. . “It will likely be a multi-year plan and could cost significantly more than $835,000.

Stone said the study should begin soon with a report and recommendations presented to council by the end of the summer.