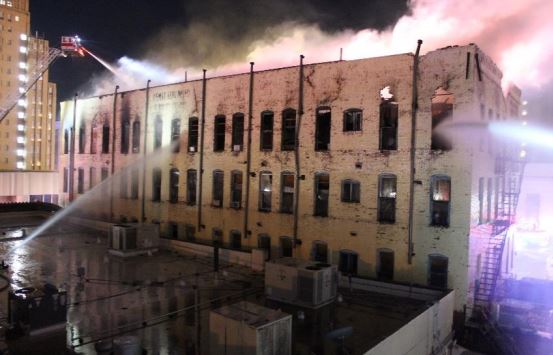 EL PASO, Texas (KTSM) — After the historic De Soto Hotel in downtown El Paso caught fire in February, the hotel owner told KTSM he planned to move from before with renovation plans and that he did not need to demolish the building.

As KTSM previously reported, a major fire broke out at the hotel in early February, severely damaging the building, especially the fourth floor and the roof.

The El Paso Fire Marshal’s Office was unable to determine the cause of the fire according to a March 23 report.

Rogelio Gonzalez, the owner of Hotel De Soto, told KTSM that he plans to move forward with his renovation plans and is reapplying for the incentive.

“Right now we have to do some demolition inside and then from there we’ll start building the roof and whatever else we need to do,” Gonzalez said.

Laura Cruz-Acosta, spokeswoman for the city of El Paso, told KTSM in an email that the city is working with the Gonalezes to reassess the financial needs associated with rehabilitating the property, taking into account the increase in costs resulting from the damage caused by the fire. .

Cruz-Acosta said any new incentive proposals must be approved by city council before moving forward.

Gonzalez told KTSM he didn’t know what the costs were at this point due to the fire damage.

“It’s one of those things as you progress and start working on it, you start seeing the numbers because all the material costs change from week to week,” Gonzalez said.

The owner said he still wanted to make it a boutique hotel, which was his original renovation plan.

Gonzales purchased the building in 2019 and planned to bring it back to life with incentives from the city of El Paso.

On December 14, 2021, the El Paso City Council unanimously approved a 380 Economic Development Program Agreement. Under the terms of the agreement, the owner would have made a minimum investment of $1,200,000 and the City reportedly supported the project in the form of property tax rebates, sales tax rebates on building materials, and permit fee rebates generated by building improvements.

A total of $109,000 in local incentives and grants (of which more than two-thirds are awarded to City incentives) has been committed to support the restoration and rehabilitation of the building into a 34-unit hotel with a storefront on the first floor.

“I was just trying to bring work and opportunity for the people of El Paso, to keep everything local, to help the community,” Gonzalez said.

According to the structural inspection report carried out by Harder Structural Engineering, most of the floor structures from the first to the fourth floor are intact.

PRIOR COVERAGE OF THE SOTO FIRE