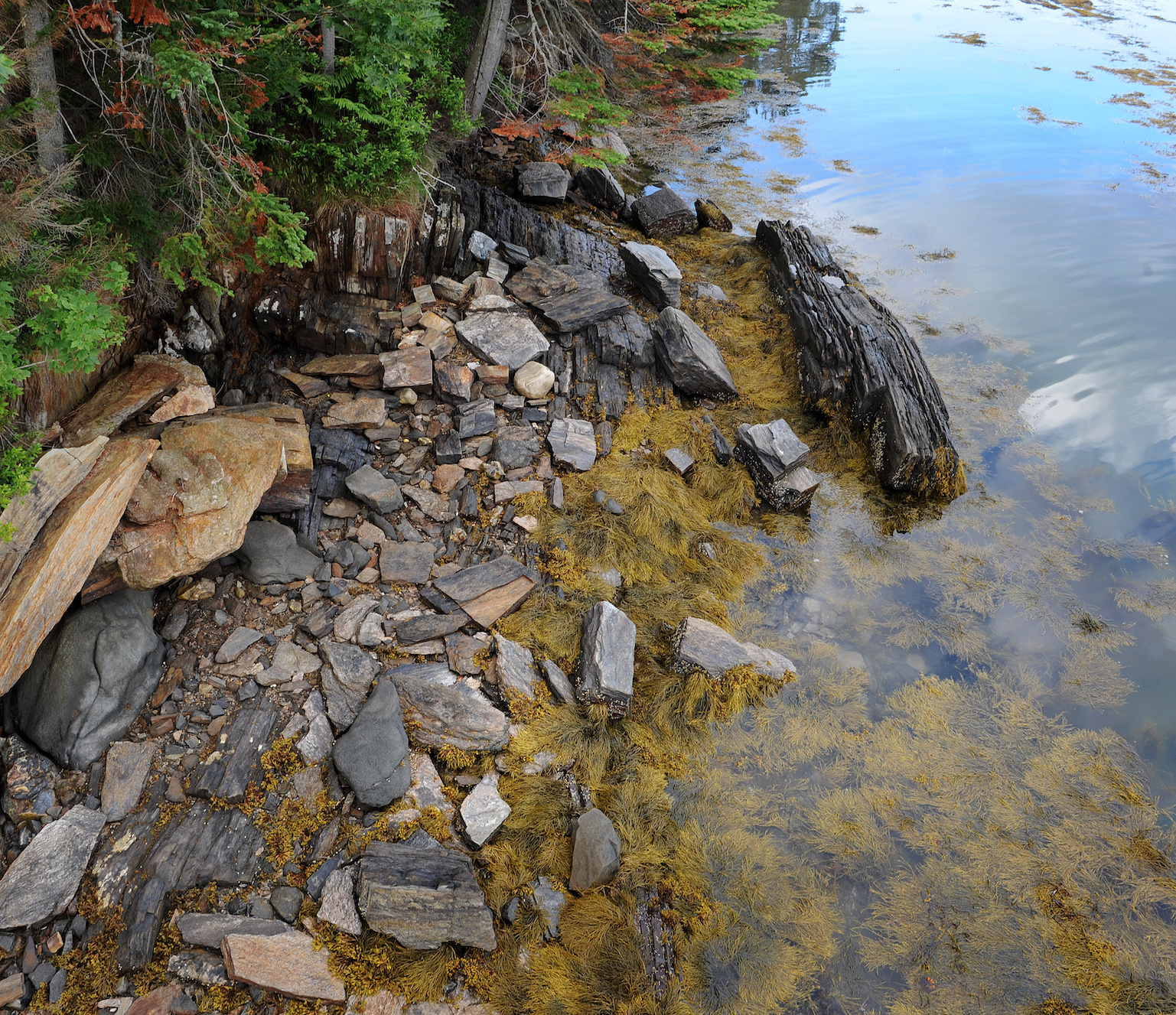 Six students were invited to present their research to the Benthic Ecology Meeting 2022 in Portsmouth, NH. Three other students participated in a poster symposium.

Scientists from across the country traveled to the small New Hampshire town from March 29 to April 2 to attend the annual conference on marine benthic ecology, or the study of different ecosystems at the bottom of the ocean.

The Bowdoin contingent was the largest group of students the College had ever sent to the conference to give talks or share posters. Katie DuBois ’11, a Doherty postdoctoral fellow in marine biology from Bowdoin, said the expansion of facilities at the Schiller Center played a role in their success, as it was the first year that summer research fellows funded by Bowdoin and Bowdoin Marine Science semester students could use the new lab space and other amenities.

“The quality of research done by Bowdoin students at the center over the past nine months shows how amazing the new facilities are and how Bowdoin’s marine science program continues to grow,” she said. “The research projects that many students conduct are on par with university-level research and provide important insights into the field of marine ecology research and human impacts on coasts.”

Having the chance to share their own research at a professional conference is an important experience for early-career scientists, DuBois added. “Most students don’t have this experience before graduate school, and for Bowdoin students, having this opportunity now means they are better connected within the scientific community and prepared for careers after graduation. their degree,” she said.

Sophia Lisle ’23, whose lecture discussed the impacts of plastic pollution on blue mussels, said the experience gave her a boost of confidence. “It was exciting to meet so many marine science experts at the benthic ecology meeting and to share what I learned in my microplastics studies with these scientists,” she said.

The students presented their research to packed rooms. They were mentored by Bowdoin faculty members Katie Dubois, Dave Carlon and Justin Baumann. Photos by Baumann.

Adami-Sampson compared microplastic concentrations in cultured oysters at nine Casco Bay farms to identify variations in pollution levels between farms and topographic regions. Some of the farms were in sheltered coves and others in an open bay, but she found plastics in similar concentrations across the region. “Mine is the first study to quantify microplastics in East Coast farmed oysters, so direct comparison with other locations is difficult. However, with approximately 6.25 microplastics per oyster, pollution from Casco Bay farmed oysters is similar to wild-harvested Eastern oysters. and farmed Pacific oysters from the west coast,” she said.

Corn Adami-Sampson put his findings into context: Although microplastics are ubiquitous in oysters grown for human consumption, microplastics have also been identified in meat, vegetables and drinking water. “With that in mind, I think we should continue to support the environmentally conscious Casco Bay oyster farmers who have made my work possible,” she said.

“I was grateful for the opportunity to study human impacts on ecology at the Schiller Coastal Studies Center, where organisms of interest are both highly accessible and relevant to the surrounding community. This project has thrown a solid foundation for my future research, which I hope will investigate human impacts and the ecology of disturbances in other ecosystems, whether marine or terrestrial.

The European green crab is an invasive species that has spread along the east coast and as far north as Newfoundland. Because scientists have identified cold- and hot-adapted crab ecotypes that correlate with variation in their mitochondrial genome, Lynch investigated whether their mitochondrial genome could influence the temperature tolerance of crabs. He used RNA sequencing to assemble the mitochondrial genome of each ecotype and assess which of its genes, if any, were differentially expressed. At the benthic meeting, Lynch talked about the mutations he found, as well as expression patterns that could provide mechanistic understanding of crabs’ differences in temperature tolerance.

Bronzo-Munich studied the vulnerability of fucus (bladder wrack), an important algae in the intertidal zone of the Gulf of Maine, to the increase in water temperatures expected with climate change. She conducted a feeding test and thermal ramp-up experiment to see if populations near Bowdoin and those farther north along the Maine coast are equally able to grow, defend against herbivores, and to photosynthesize under warming stress. “Overall, I found optimal photosynthesis at temperatures well above those predicted for the future and no evidence of local regional adaptation to temperature. Both results bode well for bladderwrack in the face of change. climate in the Gulf of Maine,” she concluded.

“I was excited about the opportunity offered by the Bowdoin Marine Science semester to design, carry out and present my research. I loved the chance to work on issues related to adaptation, herbivory, and climate change while learning about the Gulf of Maine intertidal.

As the ocean absorbs more carbon dioxide from burning fossil fuels, it becomes increasingly acidic, preventing calcifying organisms, such as oysters and other molluscs, from building shells. Ralph researched a possible mitigation solution that could help oyster farmers in mid-coast Maine avoid the economic fallout of ocean acidification on their crops. She looked Zostera Marina, or eelgrass—a common marine macrophyte – to determine if its photosynthetic abilities could improve the low pH of water near growing oysters. The results of her experiment – on which she collaborated with other students and researchers at the Schiller Center for Coastal Studies – show that oysters grown in or adjacent to eelgrass meadows on the ocean floor develop larger shells. “These findings could challenge current oyster farming practices, especially as ocean acidification continues,” Ralph said. Learn more about this experience.

“Increasing concentrations of microplastics in the water column lead to increased plastic consumption at all trophic levels: Mytilus edulis and its consumer, Carcinus maenas“

As a biology student and pre-vet, Lisle said she was fascinated by the intersections between animal physiology and the environment, such as the impact of plastic pollution on individual organisms and on a larger ecosystem. large. For her research project, Lisle “explored the amount of ocean microplastic that accumulates in higher-level trophic species by testing the transfer of microplastic beads from seawater to blue mussels to green crabs” that eat mussels. She found that mussels, which filter seawater, are more susceptible to damage from high concentrations of microplastics than their invasive predator, the green crab. “This finding has important implications for the rapid decline of blue mussel populations in the Gulf of Maine,” she concluded.

Faced with the global decline of coral reefs, many scientists are studying the tolerance of corals to ocean warming. Recent research has shown that corals acclimated to higher temperatures can demonstrate greater resilience. In his study, Holliman found Astrangia poculata colonies (also known as northern star coral) from North Carolina and Rhode Island populations to see if short-term (twenty-one day) acclimatization to high seawater temperatures had an impact on their cellular respiration, photosynthesis, fluorescence and calcification. She found strong evidence for a thermal optimum for the Rhode Island population at 22°C, and that optimum temperatures for the North Carolina population may be above 25°C. differences in photosynthetic and fluorescence rates between the two populations, revealing potential local adaptation to the light conditions of native coral environments.

Here are the titles of their projects:

Young : “The effect of salinity and conspecific odor on the molting of field-caught fish Uca spp. megalops”