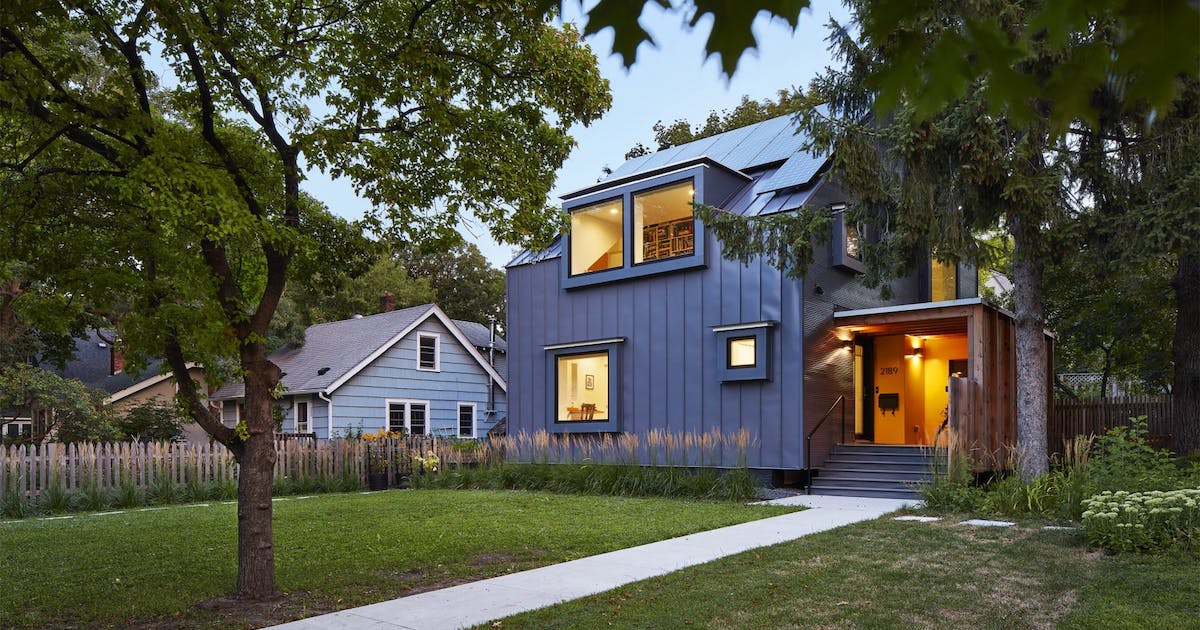 “We see things differently,” says Stephanie Howe of Studio E Architects in Glenwood, Minn. “We’re trained not to necessarily think outside the box, but to see how things flow and make sense, and to see how something fits into the context of its location. We can customize for the family there. lives.”

So what happens when architects design their own homes? In all three cases, magic.

Live by the lake

Stephanie Howe had an up close and personal perspective as she considered all the potential details that went into her family’s new home. He now occupies land next to their beloved cabin on Lake Minnewaska near Starbuck, Minn.

“Being my own client was a challenge,” she says. “I have too many ideas and was spending way too much time tweaking. I probably had a rough layout in my head for about 15 years. But it’s exciting to experience something I’ve designed from zero.”

This cottage-inspired forever home for Howe and her husband is steeped in period details that accentuate accessibility, function and convenience, including a downstairs master bedroom and bathroom with an adjacent laundry room. Thanks to vaulted ceilings – and a less-is-more approach to interior design – the airy living-dining-kitchen area feels more spacious than its actual footprint, and generous windows capitalize on the scenic waterfront location. Lake.

The couple’s two daughters have second-floor bedrooms outfitted with custom details (a whimsical loft, a generous walk-in closet) that set them apart, and a flexible space above the garage serves as a getaway for movie nights and practicing music. battery. The family moved in just over a year ago – as for the cabin, it’s now a guest house – and they couldn’t be happier.

St. Paul’s Cathedral Hill area. They were fresh out of architecture school and their goal was to win a city-sponsored competition to fill empty lots with moderately priced homes. There was another caveat: the houses had to be compatible with their historic environment.

That’s an understatement, considering the house has been their home for over 40 years. From the sidewalk, the scale of the house matches that of its neighbors. But from the less visible backyard, the upper floors become smaller as they tuck under a steeply sloping roof. “By not repeating the floor plan as you go up, you get an affordable home that looks grand from the street,” says Carlsen.

The loft-like rooms open into one another, and an abundance of windows and skylights — especially on the steeply sloped, south-facing side of the house — fill the place with natural light.

The layout of the ground floor is a nod to the traditional four-square plan, with living and dining room, a kitchen and an entrance. The second floor contains two bedrooms and two bathrooms, and the third floor is a loft-like space that the couple eventually used as their office. The three floors are connected by a staircase housed in a spectacular tower with curved walls.

Over the decades that followed, Frank and Carlsen tweaked and revised. The coating has been replaced. The unfinished basement gained a guest bedroom and bathroom, as well as a workshop for Carlsen. And a kitchen redesign retained the format of the kitchen but changed the layout slightly by removing an adjacent cupboard. Although the cabinetry has been replaced, the original – and colorful – Mexican tile backsplash has been retained.

“The selection process is easier when there aren’t a lot of choices,” Frank says. “We chose what we could afford. The house is now more what we wanted it to be in the beginning, if we hadn’t been on a tight budget.”

Back to the future

When Thomas Fisher and Claudia Wielgorecki decided to downsize, they bought the tiny house right behind their St. Paul home. There was a problem. The house – a 1911 kit house from the Sears, Roebuck & Co. catalog – was plagued with so many structural problems that demolition was the safest option. But the 700 square foot basement was retained and determined the modest scope of its replacement.

“Design is better with constraints,” says Fisher. “It’s a game. You work with the money you have, the site you have and the terms you have. You try to do something beautiful out of necessity.”

It was obvious that Wielgorecki and Fisher, the director of the Minnesota Design Center at the University of Minnesota, turned to Salmela, the Duluth-based architecture firm. Fisher has written two books on the work of David Salmela, and Kai Salmela, David’s son, was a recent student at the U.

Following an on-site age target, the living room, kitchen, master bedroom, bathroom, and laundry room occupy the main floor; the second floor houses additional bedrooms and offices. With a school across the street, privacy was an issue, so the house faces the backyard. Energy independence was another goal: 16 solar panels connected to a Tesla battery in the basement provide most of the electricity. The exterior is clad in roofing sheeting, chosen for its durability and ease of maintenance, and the many asymmetrically spaced square windows protrude from the wall, creating window seats that help give this modest home the impression of be bigger.

“From inside the house, you’re constantly looking up at the sky and the trees,” says Fisher. “The house has brought us closer to nature, and we are right in the middle of the city.”

Completed in 2019, the house has just won a prestigious American Architecture Award 2021, which recognizes the best new buildings designed by American architects.

“We wanted it to be a prototype for a 21st century Sears home,” says Fisher. “The Twin Cities are full of 50-by-90-foot lots. Our investment in architects’ fees could benefit many people.”