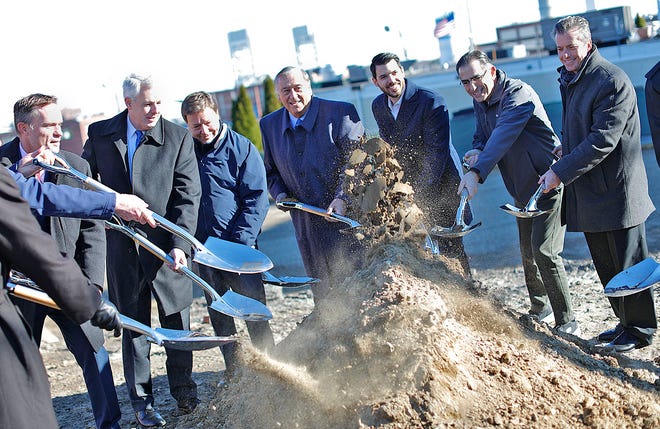 QUINCY – House of Commons Speaker Ron Mariano said he fondly remembers his childhood years around Quincy Point, opposite the once booming Quincy Shipyard.

Affectionately known as “The Point,” the neighborhood sits between Town River and Quincy Center and is home to Mound Street Beach, the original Stop & Shop, and the USS Salem.

In just under a year, 18 people who are homeless or at risk of becoming homeless will also be able to call The Point home thanks to an affordable housing project launched by the non-profit NeighborWorks Housing Solutions.

“It’s great to have (affordable housing) in your own backyard,” said Mariano. “It’s a special place for me.… It’s great to see that.”

The project will bring 18 studios to the former site of four Winter Street houses, and the local Father Bill’s & MainSpring association will provide services to its residents.

Following:Developer looks to Chapter 40B to build 4-house complex on “non-building” land in Rockland

Construction of the new building will cost $ 4 million and will be funded by state and city affordable housing money. State and federal grants will pay the rent for the people who live there.

The project took two decades to materialize. State Senator John Keenan, a Democrat from Quincy, said he wanted the state to have a more streamlined way of allocating money to affordable housing projects.

Mayor Tom Koch said a booming economy has made it difficult for people to find affordable housing in Quincy,

“We are a city on the move,” Koch said. “But, we cannot forget the people who are being left behind.”

The new building site at 54-64 Winter St. was once home to Ma’s Lunch, a family-owned business that looked after blue-collar workers from a bustling shipyard, once the backbone of Quincy Point.

Following:Ron Mariano de Quincy plans to run for another term as Speaker of the House

Following:Quincy’s development boom happened 50 years ago. And he came by train.

Mariano said it was appropriate for the site to become affordable housing, and said the project will honor Zaida Shaw, the late magnanimous owner of Ma’s Lunch who grew up on Winter Street with her 10 siblings, in the shade. of the shipyard’s goliath crane.

The contractor for the project is Curtis Construction Co, based in Stoughton. The architect is Placetailor, a Boston-based company that focuses on sustainable design.

NeighborWorks has an office on Washington Street in Quincy and has overseen several large affordable housing developments in the city, including two in Quincy Point. The larger project, called The Watson on East Howard Street, opened in 2019 and has 140 residential units leased to people of varying incomes.

Thank you to our subscribers, who help make this coverage possible. If you are not a subscriber, please consider supporting great local journalism with a Patriot Ledger subscription.