MARFA — Visitors to the Chinati Foundation’s special exhibition space this weekend will encounter an 80-foot-long elevated installation of blue-green terracotta tiles by abstract painter Sarah Crowner that they are invited to step onto .

Crowner, who views the work as a painting and has previously created tiling experiments, designed the piece as a platform to be lifted 6 inches from the floor and removed from the wall in an effort to create a scene, prompting spectators to express themselves on their state the state of mind can change quickly when entering a new environment.

“It’s tiling, but it’s also gesture, color, hard edge, pattern. All those things we talk about when we talk about painting — at least in a formal sense. It’s like walking on a painting. How does it feel?” Crowner said.

The site-specific work, titled “Platform (Blue Green Terracotta for JC)”, will be on view until summer 2024 along with a number of sculptures and photographs by John Chamberlain from Chinati’s permanent collection. Chinati curator Ingrid Schaffner invited Crowner, who was in town for an artist residency at the foundation in March and August, to mount the exhibit.

Chamberlain and Crowner’s works will not simply be installed in the same space, but will be in dialogue, each evoking a sensation of moving water. Crowner’s wavy tile, set in a chevron pattern, pays homage to a project once envisioned by Chamberlain. Inspired by the vanished pool on the grounds of Chinati, once used by soldiers at the time of Fort DA Russell, and which appears to this day as a white castle, Chamberlain envisioned an underwater environment of ceramic sculpture.

“There’s kind of a conjuration to this unrealized John Chamberlain project,” Schaffner said. “I brought [Crowner] in this story, that’s what prompted us to talk about this project.

The incorporation of Chamberlain’s photographs represents a lesser known part of his artistic practice. The images were taken with a Widelux camera as the artist moved, resulting in semi-aquatic photographs of stretched light and movement. Crowner, as an artist, wants to connect with past artists and works, Schaffner said, and has symbolically picked up the thread of the project left by Chamberlain long ago.

Crowner said for her that the large-scale blue-green tile platform straddles the disciplines she practices of painting, architecture, performance and art history. The artist kept the legacy of not only Chamberlain, but also Donald Judd, in mind when designing the work.

“That’s what I’m really happy about is how it brings all of these interests together in my regular studio practice into one kind of experience,” Crowner said.

The terracotta tile platform came together through the work of many hands. Guadalajara-based Cerámica Suro, which Crowner has worked with for over 10 years, manufactured the tiles. Ramos Tile Service, in El Paso, and SILLA, in Marfa, helped lay the tiles and build the platform, which Schaffner says is “a work of art in itself,” due to complications with the floor of the old barracks. level. With a total of 4,000 tiles covering 2,000 square feet, the piece is monumental, but each tile is unique, lending an overall servant quality, Schaffner said.

“[At the Chinati Foundation] things feel like they’re made, industrial processes and materials, that really contrasts with a lot of what’s going on here,” Schaffner said. 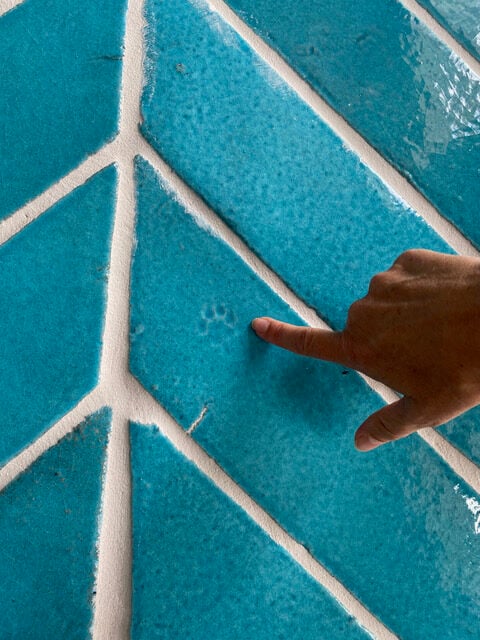 Detail of “Platform (Blue Green Terracotta for JC)”, 2022, a special exhibition opening this weekend by artist Sarah Crowner at the Chinati Foundation. Photo courtesy of the artist.

A glassy tile bears the imprint of a cat’s paw which probably went through the tile as it was drying outside. The glaze appears differently on each tile, due to the variability in the firing process, and various lines created by the grout give the work a sense of movement, much like a wave. Natural light streaming in through the windows makes the tiled pool and surrounding walls shine at certain times of the day.

“You get this feeling when you’re there for a period of time of being really engaged and immersed in a blue space or a blue-green space or an active moving space,” Crowner said.

The artist’s work recalls that in the Chihuahuan Desert, the feeling of calm derived from time spent contemplating a body of water is always welcome. Crowner will travel from New York, where she is based, for Chinati Weekend. Schaffner and Crowner will be in talks at 3 p.m. on Saturday, October 8 for an artist talk at the Crowley Theater, 98 South Austin Street. For more information, visit chinati.org/chinati-weekend-open-house-2022/.

Historic Homes You Can Own in the Morganton Area | Local News

Beautiful custom home. The Pisgah forest as a neighbor. Minutes from Linville Falls, Blue Ridge Parkway, Grandfather Mountain and the ski slopes. Upon entering the home, you are greeted by the open living space with bark and log accents, tile and hardwood floors, a gas fireplace, and custom lighting. The main level offers an open […]

[ad_1] SHREVEPORT, Louisiana – United Tile Co, Inc. was founded in 1948 to serve the needs of local contractors and builders. United Tile has a wide range of offerings including tile, engineered wood flooring, luxury vinyl flooring, rugs, countertops, cabinetry, glass and more. With the largest showroom and warehouse in the area, our customers are […]